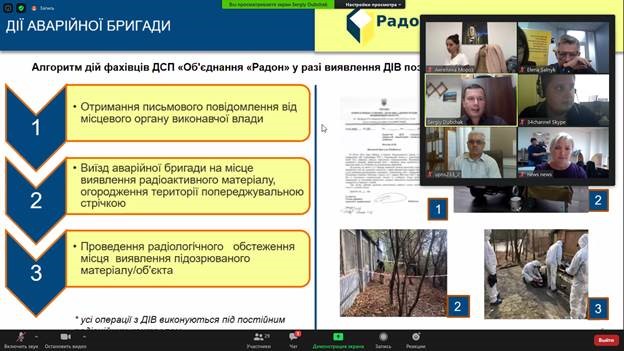 Sources of ionizing radiation out of regulatory control. How to stimulate the collection of IRSs and improve radiation safety

On September 18, 2020, a round table on the topic “Sources of ionizing radiation out of regulatory control. How to stimulate the collection of IRSs and increase radiation safety in the region” was organized by the SE “Chornobyl Research and Development Institute” within the framework of the information campaign “KROK do bezpeky”.

The event brought together specialists from the State Agency of Ukraine on Exclusion Zone Management, the State Scientific and Technical Center for Nuclear and Radiation Safety, the State Nuclear Regulatory Inspectorate and the specialized enterprise “Association “Radon”, representatives of the Dnipropetrovsk Regional State Administration and Dnipropetrovsk Regional Council, authorized persons from the main departments of the National Police and SESU, heads of local authorities, experts in the field of radiation safety, environmentalists. This is the first joint meeting of all those involved and interested in the implementation of the pilot project and information campaign on radiation safety in the Dnipropetrovsk region. Today, radiation safety is a pressing social need. The number of equipment and devices with radioactive components is constantly increasing. When used correctly and professionally, it does not pose a threat to the environment and people.

“We should remember that ionizing radiation sources that were out of regulatory control led to tragedies. Due to their own imprudence, negligence and ignorance, people who had come into contact with orphan radiation sources, or died, or received serious doses of radiation. Also, they often endangered their loved ones and strangers, who did not even suspect that they were exposed to radiation. Incidents with radiation sources led to a deterioration in the quality of life, economic losses, not to mention psychological problems and social tension, the damage from which is difficult to assess. Therefore, it is necessary to discuss radiation safety and teach people to be watchful and responsible,” noted Yulia Balashevska, Head of Emergency Preparedness and Radiation Monitoring Department, SSTC NRS.

“Radioactive items, even if they do not pose a direct threat to people, but are out of regulatory control, still leave a mark. After all, they spread contamination through water, air, get into plants, and from there, through food chains, to people. And thus, the radiation load on the environment increases,” says Valentyna Chorna, professor, Head of Ecology Department of Dnipro State Agrarian and Economic University.

At the round table, the issues of control over the use of ionizing radiation sources, their storage and utilization by specialists of the “Association “Radon” were reported. There was an exchange of experience of interaction between rescue and special services in case of detection of unaccounted radiation sources.

“Our goal is to stimulate public discussion, to look for ways to solve a serious safety problem for a densely populated and industrially developed region. We launched the campaign in June and are actively communicating with the region's community through the media and social networks. We were supported by the regional administration. But it is very important to establish effective cooperation within the project and with local authorities, experts, environmentalists. And this meeting made it possible to raise the problem of radiation safety to a higher level of interaction and cooperation,” said Olena Salnyk, Project Manager of “KROK do bezpeky”.

Reference: The Chornobyl Research and Development Institute is a domestic expert and analytical center that implements its own and partner scientific and technical research related to the management of radioactive materials, environmental protection and overcoming the consequences of radiation accidents. The Institute creates and implements information, educational and research programs in the field of radiology and radiation safety. In 2017, the institute was involved as an executor of the project "Public Relations and Information Campaign on the Program of Amnesty for Ionizing Radiation Sources", which is carried out in pursuance of agreements between Ukraine and the United States in the field of nuclear safety and programs to control the non-proliferation of nuclear weapons and the prevention of nuclear terrorism.

“KROK do bezpeky” is a campaign for radiation awareness and control over the non-proliferation of radioactive materials, in particular orphan sources of ionizing radiation. The main goal of the campaign is to raise public awareness of radiation safety rules, as well as to encourage citizens to inform government agencies about identified and / or held sources of ionizing radiation, thereby increasing the level of life safety.