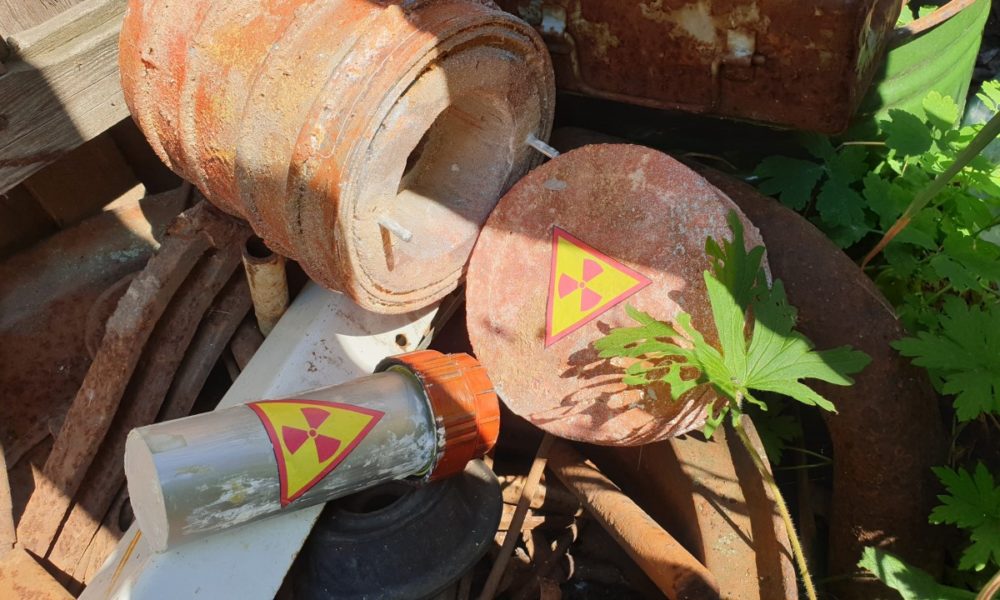 Radioactivity is nearby: dangerous items you didn’t suspect

“A foreign tourist with a radioactive souvenir was detained at Boryspil International Airport. During the check of his luggage, the “Yantar” control system was activated. Among the things, the border guards found an old ship clock, the level of gamma radiation of which was 10 times higher than the permissible level. According to the tourist, he bought a souvenir at one of Kyiv's markets, and did not even suspect the danger.” Such situations and information messages from border guards or customs officers are not uncommon. The State Border Guard Service stopped a L’viv resident at the Shehyni checkpoint while trying to leave for Poland with a “dirty” underwater watch. And at the Krakivets checkpoint, during the check of the regular bus “Kiev-Szczecin”, as many as 5 radioactive aviation chronometers were found among the suitcases.

Mass attempts to move radioactive objects across the border indicate the presence of a large number of ionizing radiation sources (IRS) that are outside the scope of state regulation and pose a great threat to human life and health. The question arises: what exactly can be a source of radioactive radiation, and how did IRS appear “in the hands” of ordinary people?

IRSs, which are not under the control of state regulatory authorities, are called “orphaned”. This term applies to lost, stolen, thrown into the trash or scrapped items - aviation and ship chronometers, gauges, compasses, pressure gauges, toggle switches, sights. Even before the early 1970s, luminous material containing radioactive salts was densely applied to these devices for better visibility in the dark. No one still knows for sure how many military artifacts containing radioactive elements walk the country, hang on the walls, gather dust in garages, and are sold for souvenirs.

If to talk about Soviet aviation or ship clocks and similar items, in which radioactive paint was used, then such items can indeed have a radiation dose of up to 800 μR/h (radiation up to 50 μR/h is considered the norm). It is better not to carry them near the body, for example in pockets. Such things could be found in the post-war years at the places of hostilities, where equipment had been abandoned, and the former military sometimes kept such things as trophies or souvenirs as a keepsake”, - says Mykhailo Koptev, the head of radiation safety service of Oles Honchar Dnipro National University.

But the Soviet industry provided radioactive elements not only to the military. A large number of equipment, instruments for calibration or adjustment of devices, mines, mining and processing plants, quarries, factories and mills - everywhere there were and are sources of ionizing radiation of various activity. Too many sources. Their movement, storage and disposal were carefully monitored. But after the collapse of the Soviet Union, an economic crisis began in Ukraine. Most of the enterprises changed their profile, form of ownership, shut down, dilapidated, control over sources was temporarily lost and they spread throughout the country. For the industrially developed Dnipropetrovsk region, this problem is especially urgent.

In the rays of danger

“Perhaps the main problem with illegal storage of sources of ionizing radiation is that people simply do not understand how dangerous it is! - says the head of Regional Center for Radiation Safety and Medical Radiology of Regional Clinical Hospital named after I.I. Mechnikov, Doctor of Medicine, Professor Faina Kulikova. - The concept of "ionizing radiation" combines different types of radiation. But they are united by one feature. All of them have high energy and tend to ionize and destroy biological objects. Depending on the absorbed dose of radiation and the individual characteristics of the organism, the induced changes can be reversible or irreversible.

Longtime exposure to doses exceeding the maximum permissible levels can be expressed in a chronic form of radiation sickness. Late effect of radiation damage can also be irradiation cataracts, malignant tumors, defects in newborns, if the mother was exposed to ionizing radiation during pregnancy, and many other pathological processes in the human body. It should also be noted that children and adolescents are most sensitive to the effects of radiation, because in a young organism all the processes of cell division are significantly accelerated and occur to a greater extent than in adults and the elderly.

Therefore, in case of any suspicion of the presence of ionizing radiation, it is better to immediately contact specialists and not make yourself and your loved ones something like “guinea pigs”. Figuratively speaking, radiation is not interested in why a person grabbed one or another dangerous object, and why he does not want to hand it over - it strikes and destroys, not figuring out who is to blame. And you must know that!”

We decided to ask ordinary residents of the Dnipropetrovsk region, how would they act if they found a radioactive object? Most of the respondents said they would call the State Emergency Service or the Police. However, they nonchalantly note that they have little faith in contact with sources of ionizing radiation in everyday life. Although the amount of dangerous radioactive objects that are found and transferred for storage to the Dnepropetrovsk interregional specialized plant “Radon” testifies to the opposite. And it is the lack of knowledge of citizens about the problem that endangers their lives and health. After all, not all detected IRS can be identified at once. This requires dosimeters and specialists. Another factor that prevented the detection and delivery of radioactive materials to special enterprises was the law. Until 2016, Article 265 of the Criminal Code was in force, which provided for a penalty of up to 5 years in prison for illegal possession or handling of radioactive materials. But the Verkhovna Rada made changes, canceling any liability in case of a voluntary report or delivery of sources of ionizing radiation by a citizen. But most Ukrainians haven't even heard of the changes. Therefore, this fact became the impetus for the launch of an information campaign on radiation awareness and control “KROK do bezpeky”, which is being implemented in the Dnipropetrovsk region by the public union “Chernobyl Research and Development Institute” with the support of the governments of Ukraine and the United States.

“Until 2016, any handling of radioactive materials was subject to criminal liability. That is, if a citizen found a source of ionizing radiation or a radioactive element, then the SSU dealt with this case, conducted an investigation and found out how it got to this citizen. If it was proved that he had stolen or hidden it, it was a criminal offense. What has changed now? In December 2016, Article 265 of the Criminal Code was amended and a condition was added that voluntary handing over, voluntary notification about find of ionizing radiation sources or simply about that you have this source, is amnestied. Such a citizen is not criminally liable, even if he has kept this source for a long time”, - notes Olena Salnyk, head of the “KROK do bezpeky” project at the Chornobyl Research and Development Institute.

At the same time, any attempt to sell radioactive elements is still a crime. For example, in the Vilnia district of the Zaporizhzhia region, a woman kept six containers with 43 kg of uranium on her farm for 10 years. When she wanted to sell it, she was immediately arrested and subsequently sentenced to two years in prison. In Berdyansk, the SSU arrested a man who had kept hazardous radioactive materials in a rented garage for 2 years and also tried to sell them. And in the Ivano-Frankivsk region, the special services detained a whole gang that was carrying more than a kilogram of uranium in the trunk of a car for sale. They were also convicted. Of course, in all these cases, the “enterprising kamikaze” endangered not only themselves, but also thousands of people around them. After all, radiation has neither color nor taste and kills living organisms quietly and inexorably.

We associate radioactive contamination primarily with global man-made accidents and disasters like Chornobyl or Fukushima. But we do not even suspect that the radioactive hazard may be very close in the form of inconspicuous sources of ionizing radiation. And just knowing this can save lives. If you find an object with a radiation hazard sign or have a suspicion of its radioactivity, move away, do not touch it with your hands. Be sure to notify rescuers, police, or local authorities. And sleep well and live long.