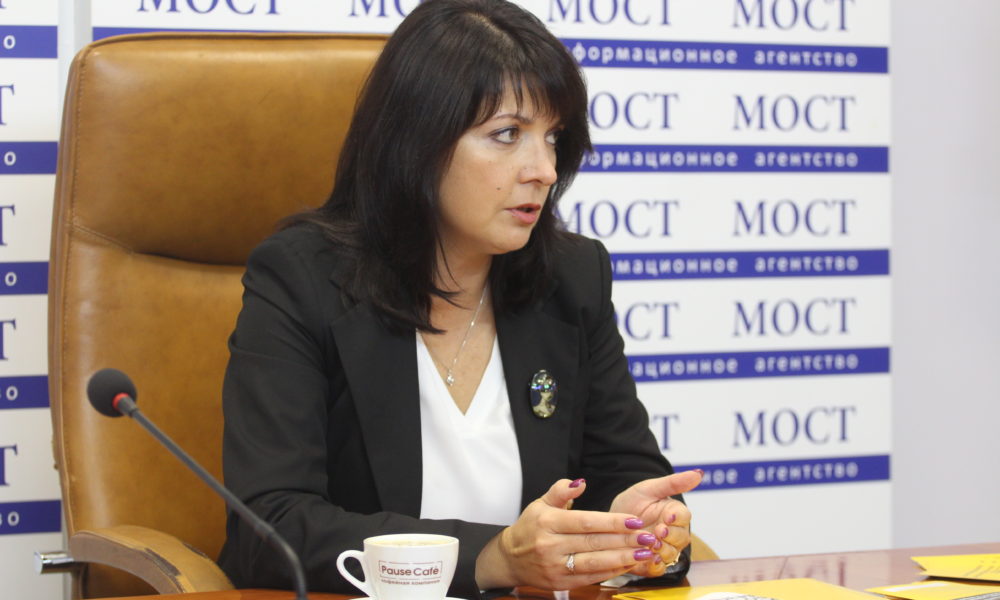 Head of Radiation Safety Project Elena Salnyk: “People do not know what to do with radioactive sources, so they can lose their lives or freedom”

There is hardly a person in Ukraine today who is not familiar with the Chernobyl disaster. But few people know that a year later in Brazil, a radioactive cesium capsule destroyed an entire village. In Goiânia, the owner of a scrap yard ordered to saw an element stolen from the abandoned clinic, and he brought the spilled glowing powder home. Two months later, several members of his family died from radiation sickness, and the contamination spread throughout the village. When the source of contamination had become known, the village was literally wiped off the face of the earth, packed in containers and disposed.

In order to prevent such disasters, today in the Dnipropetrovsk region there is a “KROK do Bezpeky” project, the purpose of which is to inform the population about the rules of radiation safety and handling of radioactive sources. We have talked to its head Elena Salnyk to find out how urgent the issue of radiation safety is for Ukraine.

- How did the Dnipropetrovsk region become a participant of the “KROK do Bezpeky” project? Is it connected with man-made disasters or industrial factors?

- Dnipropetrovsk region was chosen as a pilot for this project due to the fact that it is one of the most industrialized regions in Ukraine. And sources of ionizing radiation are used in industry. These are sensors, controllers, level gauges, and so on. In everyday life, the sources were used in smoke detectors of fire safety systems.

Within the framework of the project, we are talking about orphaned ionizing radiation sources. Especially about those that were lost in the early 90s during the collapse of the Soviet Union. During the turbulence that prevailed at that time, many enterprises went bankrupt and were not able to dispose of this waste, because it had to be paid for. And it was during this period that many of these items were out of regulatory control.

The goal of the “KROK do Bezpeky” project is to put hazardous radioactive sources under regulatory control, explaining to people what and how to do this.

By the way, it was the case in Goiânia (a town in Brazil) that made the IAEA (International Atomic Energy Agency - ed.) pay attention to tightening the rules for handling sources that had not been so demanding before. Currently, all IAEA member countries comply with these strict rules. They consist in the fact that any source of radiation that appears in the country must be licensed, registered and its path must be traced to the moment of disposal.

- Why was it a problem to collect these sources? It is clear that enterprises could no longer do this. Ordinary citizens probably just didn't know. And the state?

- It was a matter of exclusively priorities and finances. First, it was necessary to solve the problem of the consequences of the Chernobyl accident. It was necessary to build and certify for safety modern storage facilities for radioactive waste. And only then they began to collect sources and the waste itself with a very high degree of danger. In 2006, such a project started and lasted for 4 years. In 2010, preparations for the implementation of the “KROK do bezpeky” project began. And just now, a campaign has begun, which should contribute to the final cleaning up of, let's say, all radiation debris. We could not start earlier due to a conflict of laws. The Criminal Code of Ukraine provided for liability for any unauthorized handling of radioactive sources.

Only in 2016, part 4 was added to Article 265, which guarantees citizens an amnesty if they voluntarily report the presence of an ionizing source. And even after that there was a curiosity. A man in Zhytomyr bought a calibrator at a flea market, saw a sign of radiation hazard on it and, realizing what it was fraught with, took him to the Kiev specialized plant of the Radon association. And there, following the old procedure, they turned to the SSU. Those, in turn, also acting according to the old procedure, detained the man. They sorted it out for a long time, but then they let him go without initiating a case. It was very significant that neither citizens, nor special services, nor even law enforcement officers were aware of the changes in legislation.

- Speaking directly about the “KROK do Bezpeky” project, what are its priority tasks?

- So that it doesn't work out like with a man in Zhytomyr. He did a good deed and almost paid the price. First of all, we are talking about an amnesty in case of a voluntary report about a radioactive source, law enforcement officers already know about this, all special services know how to proceed further, and we inform the population of radiation safety rules. If a person assumes that he is near a radioactive source, he needs to move away and as quickly as possible, and never pick up a suspicious object...

- How can a person understand that he is near a radiation source?

But the most important thing we are talking about within the framework of the project is a request to citizens to inform rescuers, police, and local authorities about identifying sources.

- To what extent, in your opinion, is the population informed about the radiation safety standards and how to handle radiation sources?

- Before starting the development of content for the project, we conducted a study that showed a high awareness of residents of the Dnipropetrovsk region, especially among men. This is understandable, there are many workers, engineers and technicians from large enterprises, and people, for the most part, know the rules of radiation safety. But they are completely unfamiliar with what these sources might look like and what to do when they are found. People are not very aware that the sources are very dangerous despite their small size. Yes, we cannot show what all sources look like. There are thousands of them by shape. But we can teach to distinguish between them and teach how to handle them.

- In other words, the objective of the project is to create in people’s minds a roadmap of what to do in case of source detection?

- Exactly. Moreover, it is important to create in the minds of people a clear understanding that such sources cannot be handled without authorization. They cannot be sold, they have no value, and every attempt to sell them immediately falls into the field of vision of the special services.

By the way, recently there was a case in Lviv. There, a man tried to sell 17 smoke detectors with radioactive elements. All items had appropriate radiation hazard markings, and the man knew perfectly well what he was selling. And he understood to whom he was selling them only when he was in handcuffs and heard that he was accused of selling radioactive materials and was arrested.

That is why it is important to conduct such a campaign not only in the Dnepropetrovsk region, but throughout Ukraine. It is necessary to educate people about the dangers of handling of such sources and its illegality. If this man knew the rules, he would not have gone to sell these materials. And so, instead of fishing and picking mushrooms, he has received criminal proceedings and imprisonment. Because illegal handling of radiation materials is on the face, and the law provides for a punishment of 2 to 5 years. If there is harm to the state or people, then the law provides for a punishment of already from 5 to 8 years in prison. And if this is a repeated offense, then already 15 years you can get it. From 2010 to 2019, 28 people were convicted of illegal handling of radioactive waste. Compared with the number of robberies or thefts, this is a trifle. And if you think about the consequences of such handling of radioactive materials, it becomes scary.

- How, within the framework of the project, do you convey information about radiation safety to people?

- We divided the population of the region into target groups, and for each target group the special content has been made. We have created a popular science film that tells about the sources of ionizing radiation and the difference between natural and man-made radiation.

To convey information to the smallest, we have created a series of cartoons. There are also comics for an audience of 16+, in which we have set out all the necessary information, taking into account the style and language of communication.

And serious articles, news and other materials are published on the most popular Internet resources and in newspapers in the region. We also have our own Facebook pages and, in fact, the project website.

- Don't you think that such a massive campaign can intimidate citizens?

- We worked through all the material in focus groups. Only housewives had fear, they reacted a little in panic. Perhaps about 15% of the population will have such a reaction, but given the way we communicate, I believe that we do not cause fear. We carry out explanatory work and explain all aspects as much as possible.

After all, even the word “KROK” is an abbreviation: “Radiation Awareness and Control Campaign”. We want to give awareness and understanding that the situation is controllable. The state has a radiation safety system and control elements. All that is needed from citizens is assistance in order for this system to be maintained and even more effective than it is now. So we have no purpose to intimidate someone.

- What steps should a person take when detecting a potential source of radiation?

- First of all, do not take the object into the hands under no circumstances. Move 10-15 meters away from it as soon as possible and inform the state authorities about the find. We are talking about the police and the State Emergency Service. Each of the departments has its own role in this process. The police fences and secures the found object, informs the local authorities. Next, a protocol is drawn up, the specialized plant is informed, after which the object is handled according to the established instructions.

- How long will the “KROK do Bezpeky” project last?

- The campaign will run until March 2021. Based on the results, we will conduct a sociological study and see how we have achieved our goals for communicating information. Of course, I would like to implement this project throughout Ukraine, because, to my regret and surprise, the radiation safety rules were removed from the lessons of HSTC (health and safety training course - ed.) in schools. And this is weird.

Firstly, there was Chernobyl disaster in our country. Secondly, whatever you say, Ukraine is a nuclear power. Yes, we have no nuclear weapons. But from the Soviet Union we inherited the military radioactive burials and we have 4 nuclear power plants. And children need to know as much as possible about radiation safety.